Recently while talking with someone on a remote session where the cameras were turned off, they noted that my avatar was none other than Bane, as he was portrayed in The Dark Knight Rises. The person on the other end asked, “So is Bane your favorite supervillain?”

Oh, the unfortunate soul should have had some idea of the rabbit hole they just decided to climb down. There’s just no way they couldn’t.

I qualified my statement by saying that while I loved Bane as he was in The Dark Knight Rises, it would be difficult to call him my favorite. After all, I’ve always been a big fan of Two-Face, not just in The Dark Knight but throughout all of the Batman comics I’ve read. Two-Face was just always a fascinating character to me.

The conversation grew from there, naturally, to other supervillians. We discussed the history of the Joker, up to and including the Joaquin Phoenix interpretation that, if you remember, was declared by several dopes as the reagent to set off a spree of killings unparalleled in cinema history because the movie was too dangerous even to watch. (They were, of course, wrong.)

For the record, I also remember a person voicing similar concern that Heath Ledger’s interpretation of the character was too charismatic and that The Dark Knight should have been rated R as a result. This particular person, however, was not a blogger claiming to be a critic or journalist but just someone I knew on a personal level.

Maybe they should have been hired for movie reviews or cultural columns in major newspapers.

Anyway, the topic at hand this day was supervillains and, if Bane wasn’t my absolute favorite, which one would be a favorite. It was difficult to choose, and I couldn’t, really. It’s because I was hinging on the definition of a supervillain.

The term supervillain tends to conjure a specific image to people.

Are supervillains merely the domain of James Bond movies or comic books? Do they have to have grand ambitions of domination and destruction? Do they exist only as the foils to superheroes?

Supervillains tend to have networks of toadies and sycophants, made up of anything from henchmen to corrupt bureaucrats and politicians. Supervillians are typically driven to conquer or topple the world. Super powers are a plus, but not required. Usually supervillains have awesome lairs, often masked by the mundane or accessible by an exclusive access point.

They’re almost always charismatic. They attract the evil and corrupt the good, or set out to destroy them.

I guess the reason I got hung up on it was because I didn’t want to box myself right into the most obvious choice. Who, you might ask?

It would have to be Darth Sidious from Star Wars. (Known aliases: Sheev Palpatine, The Emperor, Senator Palpatine, Supreme Chancellor Palpatine.) He fits all the criteria of a supervillain.

This is a villain who:

This wasn’t even where I intended to end up with this. I just got here as I realized that we never put the appellation “supervillain” on good old Sheev Palpatine, but…he is. He’s probably the greatest of them all.

Of course personal preference puts a finger on the scale for any subjective judgment like this, but it’s damn hard to find someone who isn’t captivated by Palpatine’s charisma. He’s a gleeful supervillain and a ton of fun to watch. 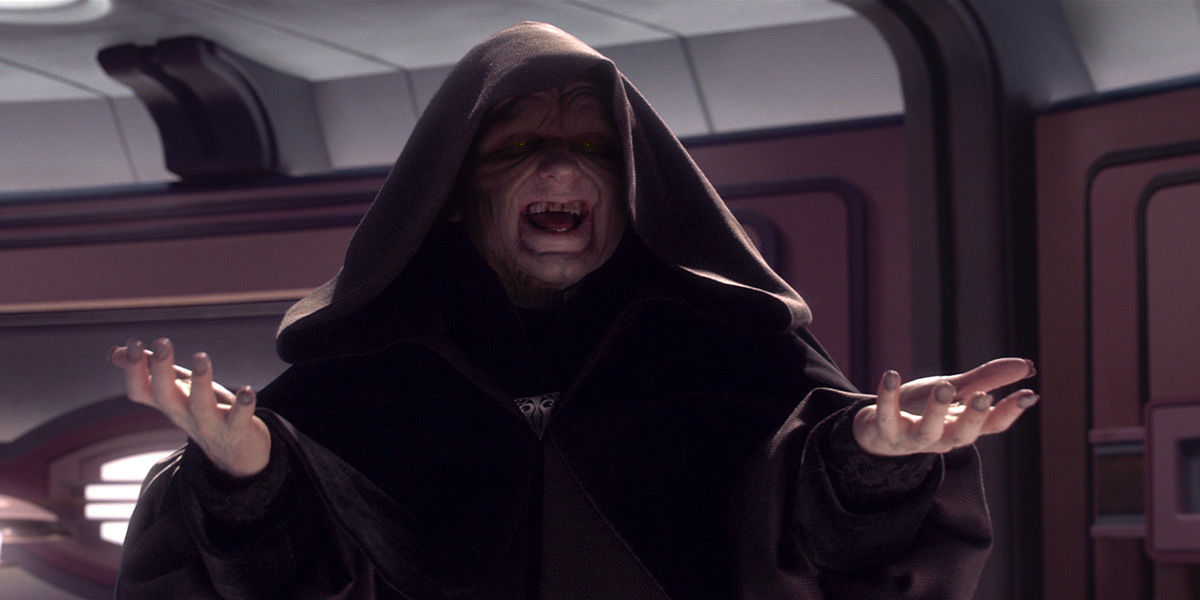 I CAN believe it’s not butter!

For MCU devotees who would jump all over me with “But Thanos!” statements: Thanos was an interesting supervillain for the most part, but he wasn’t the greatest. His ambition had all the charm of an angsty fifteen year old who discovers Death Metal for the first time. Amusing, but not really any more memorable than anything else.

2 thoughts on “Who’s Your Favorite Supervillain?”